Zoo’s all across the country are pushing the limits by raising Yellow Labrador Retriever’s and baby Cheetah’s together, making them the best of friends. Not only are these retrievers’ becoming cheetah’s best friends, but also they are actually saving them from extinction.

A video gone viral on YouTube entitled “Why are there Labrador retrievers in this zoo’s cheetah exhibit?” takes a deep look inside the retriever-cheetah match up inside the Columbus Zoo. The stars of the video are a Yellow Labrador Retriever named Koby and a cheetah named Kiara. The two were raised together from cub-hood and pup-hood through adulthood making it so that Kiara sees Koby as her brother, instead of as a threat or her next meal.

Earlier this year Kiara needed leg surgery and Zoo Management claims that if it were not for Koby they do not believe she would have recovered like she did. Yellow Labrador Retrievers are notorious for being comforters, supporters, lovers, and best friends, so when Kiara needed him, Koby was right there. He nurtured her through her recovery and helped her to feel at ease. Once she healed, he helped her snap back into their normal routine of chasing sticks and enjoying every day together.

The affectionate bond between these African Cats and Yellow Labrador Retrievers inside Zoo’s all across the country is actually a way to promise awareness about the way that dogs are helping to save Cheetah’s lives from extinction in the wild. 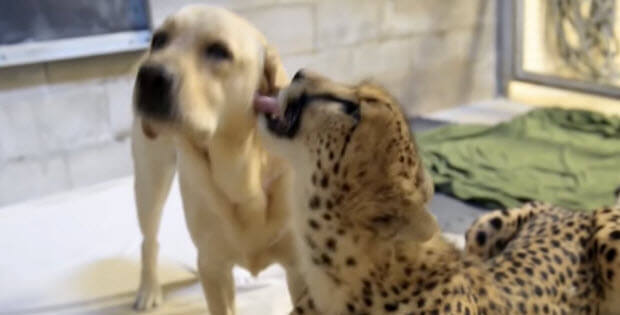