The news these days is generally full of hardcore politics, depressing stories, or misleading information.

In order to add some joy and sparkle to their viewers day, WTVJ decided to switch it up in their post-Thanksgiving segment by showcasing a dog named King, who was looking to be adopted in the hopes that one of their viewers would give him a forever home. They even arranged for him to have his very own segment. WTVJ partners with a local community association purposed to aid in finding homes for rescued and homeless animals. He was set to debut as after the morning weather report and both King and the WTVJ team were so excited and it most definitely showed.

The sweet one-year-old American bulldog mix walked by the desk Philips was standing behind, and Philips couldn’t help but call out to him saying, “Hey King”! King was so excited to show himself as “available for adoption” on his segment on WTVJ that he jumped up on the desk and kissed the weather reporter, Ryan Phillips, in response on live TV! Philips reacted in jubilee and greeted King with a hug and a gentle rub on the head, then said, “WOW! On Live TV!” He also remarked that he had steak treats behind the desk, which caused King to jump up on the desk.

The show had to go on so producers switched the screen to a map while in the background viewers can hear giggling as Philips tries to coax King off of the desk and back to his dressing room in a “graceful fashion”. The crew made remarks back and forth discussing how adorable it was and how they did not plan for King to show off that way.

Kings video interrupting the weather drew attention back to another dog, a one-year-old Shepherd-Mastiff cross named Ripple, who also interrupted live TV just before his own segment to try and help find him a forever home. It would seem that dogs have a sort of knack for interrupted Live TV when their adoption is at stake! Both King and Ripple because internet sensation leading to their adoptions in forever homes. 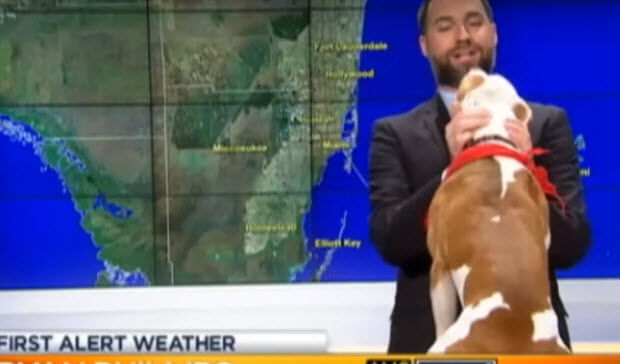