Sometimes, the best rescue stories are those made not by large rescue groups of organization, but rather by simple entities who happened to be at the right place and at the right time.

More often than not, we are captivated by stories of dogs and other animals being rescued from being homeless, neglected by their owners or even abused by the people who were meant to protect them no matter what. This is the sad reality we live in nowadays.

It seems there are some people and even dog owners themselves who don’t care about the well-being of dogs. Some who are supposed to give these fur babies a second shot in life are also the first ones to turn them down.

They would go as far as telling good samaritans that such ill and neglected dog is as good as a lost chance But lucky for dog lovers and luckier for these poor dogs, some are still very much willing to fight for them.

It takes a heart to feel compassion, but a heart of gold to feel empathy and actually do something to help. This is what I learned when I saw a dog rescue story on youtube.

Misus Yaya is a YouTuber, and her love for dogs and vlogging as call it led to an amazing story that I will share with you today. She already has one beautiful dog, but that didn’t stop her from taking in a poor homeless dog in need. 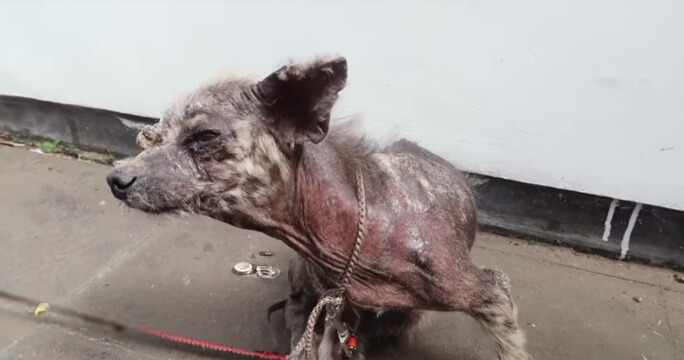 One day, Misus Yaya found a small homeless dog whom she named Benji in the streets. No one attempted to take the dog home, and it was understandable because it has a serious case of what appears to be mange.

He already lost most of his fur, has scabs and dry skin all over his body and appears to be weak. He was itching all over. With just one look, one can tell he is in a very bad shape. You can’t even tell if he’s a dog at first glance! That’s how bad his condition was.

Determined to help the poor dog, Misus Yaya called in a vet, but only received terrible news.