When it Comes To Dogs, We Often Take for Granted That They Are a Lot More Like Humans Than We Expect Them to Be.

Furthermore, they are a lot more like toddlers than we expect them to be. They have to be potty trained, taught to sleep on their own, trained not to make loud noises for no reason, trained not to make a mess in the house, and the list goes on. This may quite possibly be the very reason why they make such incredible companions for humans, particularly for children- because they are just like us!

In fact, in a video on YouTube called “GIVE ME MY TOY!!!!” we can clearly see two Siberian Huskies fighting over a purple toy just as if they were toddlers. Their owners added dialogue for an added measure of humor, and it truly displays the human-like nature of these animals.

The video begins as Mishka, a Siberian Husky, sits and chews on a purple toy. Laika, Mishka’s sister who is also a Siberian Husky, enters on film and tries to take the toy away from Mishka. “That’s mine!” the screen reads. The dialogue continues as follows:

Mishka continues to play with the toy as her sister continues to look at it longingly and plots to steal it back. As Mishka paws at the purple toy and continues to lick it, a black lab enters the scene and the screen reads: “you don’t remember where it’s buried…..I do……” then the black lab exits the scene. 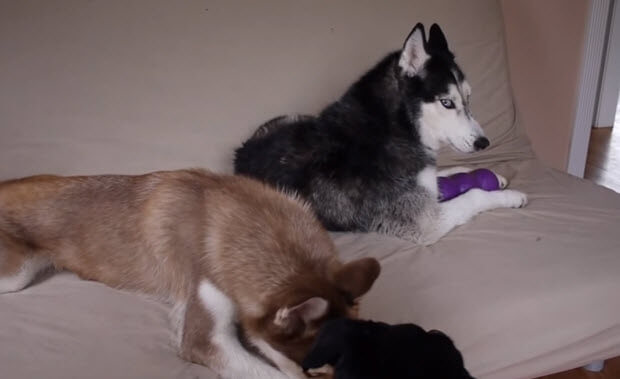