In the 2014 Hungarian film ‘White God’, director Kornél Mundruczó took us into a world that we have often heard about and are also perhaps aware of as the lurking underbelly in many regions of the world. ‘White God’ narrates the story of an abandoned dog that is captured and taken by a man who trains dogs for fights. There is a fictional uprising of the dogs but that is the premise of the film. In reality, dogs trained and used in fighting or even baiting end up like Rambo, at animal dumping grounds.
Rambo was rescued at Rock Hill in South Carolina. He was abandoned by whoever the owner was in a very poor state. He was shocked from the brutal abuse, he was bleeding and he could barely stand or move. After being found by Every Life Matters Animal Rescue, Rambo was taken to the Baxter Veterinary Clinic. Vets are certain that Rambo was a bait dog and they are hopeful that Rambo will recover.
Bait dogs are not used for the actual fights. If you have seen ‘White God’, then you can imagine how painful, brutal and unimaginable the training is for dogs being prepared for a fight. The fights are gruesome beyond typical explicability. Bait dogs are the ones that are used to train the fight dogs. Bait dogs are more submissive. 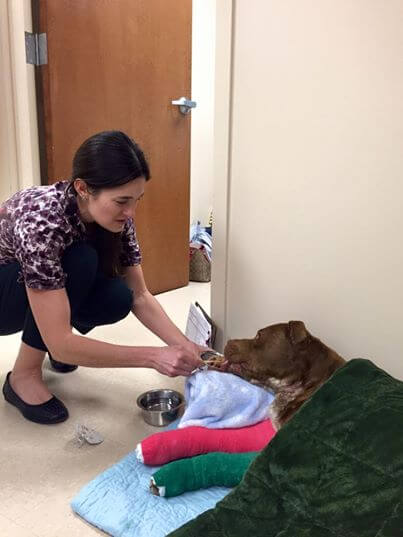