Every year, thousands of pets go missing because of something that terrified them – loud noises which mostly come from fireworks.

I came across a rescue video of a dog so scared he refused to move an inch from his hiding place. The reason for his fear? Fireworks. I have a dog who was also scared of the loud banging sounds created by fireworks. Every time a big occasion is nearby and someone used fireworks, he won’t stop until he finds a dark hiding spot. New Years were the worst as he will not come out of hiding to eat.

I learned it was natural for dogs to be afraid of fireworks or anything that produces loud sounds. These loud sounds make them afraid as it triggers their nervous system, which is not good. If dogs are scared and their nervous system is triggered, they tend to run away and hide. Most often, this leads to these dog turning into stray as they will end up losing their way back home. Some will even be afraid to come out of the safety of their hiding place even if the loud noises have stopped.

Hope For Paws once received a call from a man who claimed he found a scared big Pit Bull under his car. It seems to be scared of something and made the covered car his refuge. No matter what the car owner did, the Pit Bull refused to come out. This was the reason why he decided to call Eldad and ask for help.

Upon arriving in the scene, Eldad and a female rescuer, Lisa Arturo who was also part of the Hope For Paws team went to meet the man who called them. He went on to show where the car is, and where Pit Bull was taking refuge. 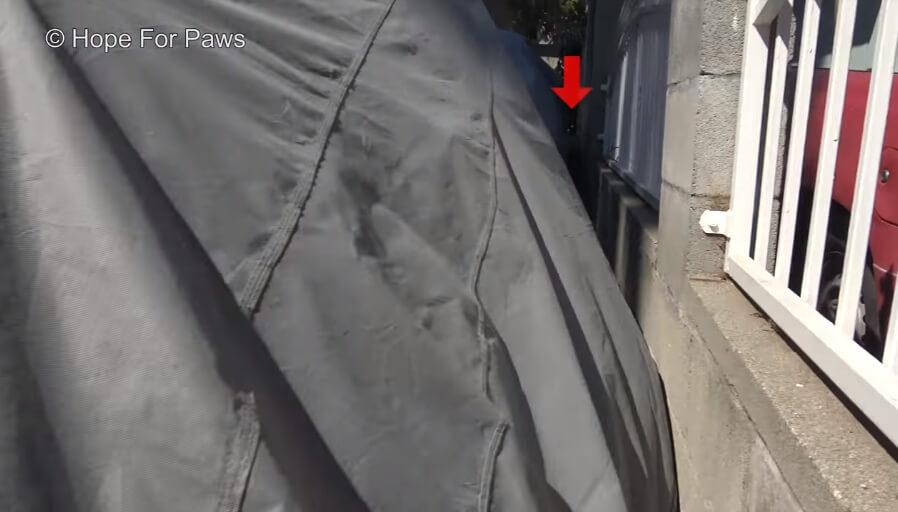 The car covered with a vehicle cover was parked near the residential wall, and the Pit Bull shrunk back further away from the small crowd of people.  The location of his temporary refuge did not help as it was hard for his rescuers to reach him and navigate their way near him. That and the fact that moving the car is not an option – they may hit the dog and cause injuries to the poor soul hiding away from sight.