Sometimes you’ll find rescue videos which will leave you hanging and asking for questions, like the one I’m about to share with you. With so many questions left, I found a strange rescue video that was uploaded not too long ago.

The video was published March 13, 2018. An animal rescue group – Stray Rescue of St. Louis answered a call about a poor Pit Bull tied up in a basement. The caller claims to have just bought a new home, and found a Pit Bull that was chained up in his basement. The caller told the rescuers that he or she has no idea how long the Pitbull has been tied up in the basement, or who did that to the poor dog. The caller also told Stray Rescue of St. Louis that he or she will be sending a friend over to let them inside his house on his behalf.

The rescue team did come over and found a jumping dog who was so excited to see people in the pitch black basement. She was a white Pit Bull with black spots and seemed to be a very sweet girl.

He was very friendly and wanted to make her way up the stairs but his short chain did not allow her to wander very far. The rescuers placed her on the leash, removed her chain and took her outside. The rescuers proceeded to check on the basement.

The poor dog was living in the dark, surrounded by trash and miscellany, and her feces and urine can be found wherever his chain allows him to be. It was obvious she has been here for a while, but not that long as she still looks healthy and bubbly. 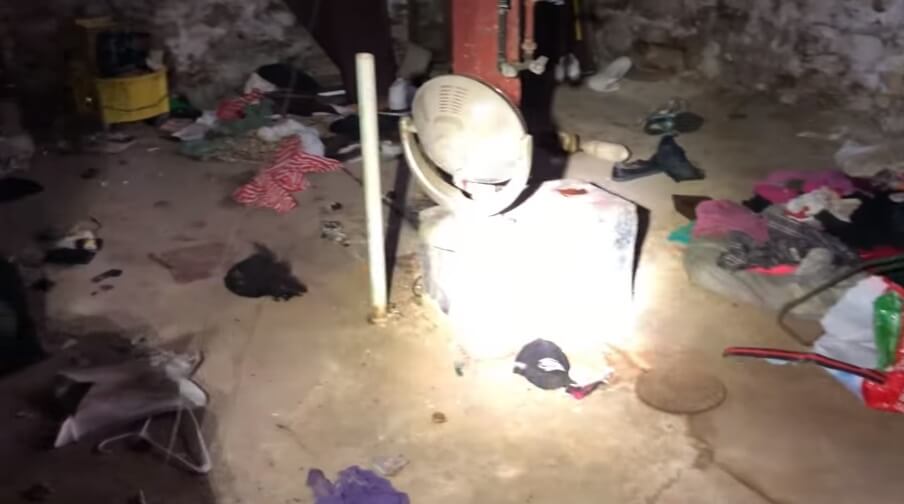 Jumping Bean, the name given to her by her rescuers, was very much worthy of her name. She was a very happy and enthusiastic dog, obviously wanted the attention and love that every pet wants and deserves. I am happy she is no longer tied in a chain in a dark and lonely room filled with trash and his wastes, but something’s not adding up.