There Are Horrific Tales of Cruelty Towards Animals.

Owners abandon their dogs in unlivable conditions. Dogs are abused, brutally beaten and left to starve. Many don’t even provide clean drinking water. There are some who get their dogs to fight and some opt for worse by using them as bait dogs. From dumping dogs at odd places to just tying them to a pole and leaving to never return again, hundreds of dogs are compelled to meet their worst fates every day.
The incident that we are about to share with you is perhaps one of the most horrific you would have ever heard. Abandoning a dog in the city, without tying it to a pole, would seem angelic in comparison. A little puppy, barely a threat for its size, had chewed on a phone, presumably a touch-screen smartphone since that is what people have these days. The owner could not tolerate this and instead of trying to just make the puppy understand that the phone is not a chewable toy, what he did would shock you.

The owner threw boiling water on the puppy. The owner did not stop there. After drenching the little animal with boiling water, he threw the puppy from the fourth floor down to the concrete pavement. Imagine the sheer brutality and heartlessness, lack of humanity and even a sane mind that one would treat a little puppy in such a manner. 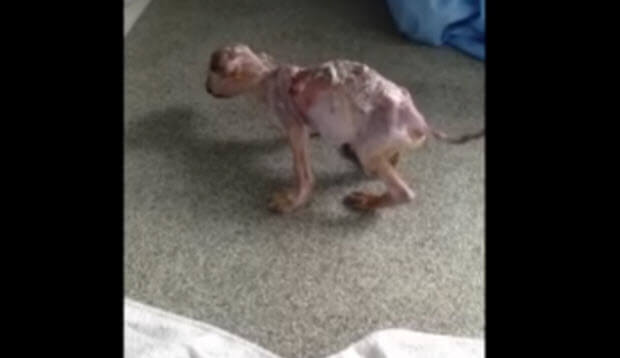