To what extent would a mother go to save her babies?

There is no simple answer. Mothers can go to any extent to protect their newborns from all known and even unknown threats. But when the mother is a beagle and confined within a puppy mill that also has other dogs in a miserable condition, there isn’t much you can do.

Two investigators in New South Wales, Australia, had learned of a puppy mill in a remote area of the state. Debra Tranter had been to the puppy farm a few months ago and discovered dogs living in extremely unhygienic conditions. The mill was rat infested. There was no food, water or even adequate shelter for the dogs. Tranter and her co-investigator had made up their mind to visit the puppy mill one night without notice and effectively trespassing to find out more.
The night they visited the puppy farm, the situation had worsened. The floors were dirty, there was no bedding for the dogs, all the dogs were crammed into pens that neither had enough space nor were they livable. It was a shed, dilapidated and dangerous.

The dogs were drinking filthy water which was covered with green slime. There were feces and urine everywhere. The dogs barked together making for a deafening noise.

Tranter took a few photos and also shot a video. When they were about to leave, they heard some noise, what appeared to be of puppies. They could not see any puppies. They did see a beagle and other dogs lurking all around. 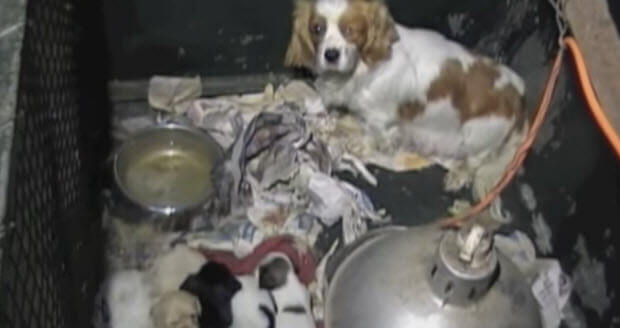