It’s heartbreaking to find that owners can just go and abandon their pets like they meant nothing at all, but it’s amazing how there are still good people out there – always ready to help without making second thoughts.

A black female dog was abandoned by her owner in a forest in South Carolina. She’s been living alone, with no regular food source, no one to cuddle with, no roof to take refuge on, and had to depend on herself just to survive. Many things could happen – animal attacks, seeping cold weather, wet rain and hot days, not to mention possible starvation and dehydration. How long has it been since her owner left her there? She’s been living in the forest for a year.

Imagine – a poor homeless dog has been living on its own for 12 months, how many weeks and days? She was a domesticated dog – a pet that suddenly turned to a stray dog after being left behind his her owners. Things were not looking good for this poor soul, and one-day things just went from bad to worse.

One fateful day, she was at the wrong place at the wrong time. She stepped on an old and rusty trap – the ones used to capture coyotes. She had to endure the pain on her own. The locals in the area tried to capture her, but after five days, they were unable to do so. It seems luck was not with them, even more so for the poor and injured dog. 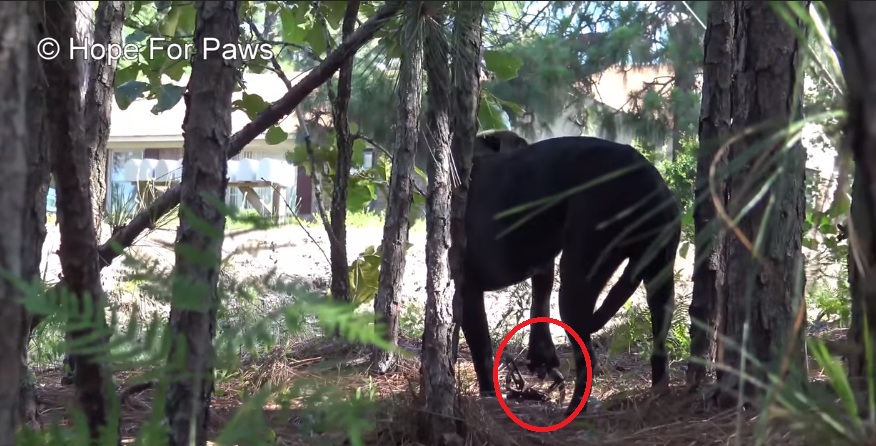 So, a woman decided to contact an animal rescue group, Hope For Paws, to try and ask them to help save the homeless and injured dog. The members of the rescue team had to fly from California to South Carolina in order to help save the dog.

When Eldad and Loreta arrived, they went on straight to find the injured dog. Unfortunately, they along with some officers were unable to locate her after searching for a whole day. the two rescuers figured the injured dog was scared of the officers who tried to save her, which is why she is now hiding.

On the next day, the two rescuers asked the officers to let them search for the injured dog in the meantime, explaining their theory, to which the officers understood. They let the two work alone.

Before they arrived, the locals and officers set up a humane trap to try and coax the injured female to walk into it, but she refused to do so.