When it comes to saving animals, especially injured and stray pets, one of my favorites have always been Hope For Paws. Their rescue videos say it all – their goal is to save and rescue stray animals who have no one to turn to, and those dogs or cats that have injuries. They are passionate in what they do and are always willing to help the best they can. They are gentle, kind and empathic individuals who will come as soon as they can to save cats and dogs no matter what danger lies ahead.

Last January of the same year, they released an epic video showing an intense rescue mission involving a homeless and severely injured dog. It was nothing like I have seen before from their rescue missions – the poor poodle was so frightened it actually did something that shocked me.

This is the rescue story of Washington.

Hope For Paws received a call that a poor stray poodle was found alone in the desert. The poor dog has an injury located at one of its back legs that needs urgent medical treatment. So, Loreta and Eldad woke up early and drove out to the desert early in the morning to save the homeless poodle.

Upon arrival, they met the good Samaritan who called their hotline and led them to the dog’s location. The poor poodle was under a desert plant and was sitting on a towel which looked like a flag. He was surrounded by trash and dirt and was frightened by the mere sight of people. He started barking at them as if telling the intruders to back off. 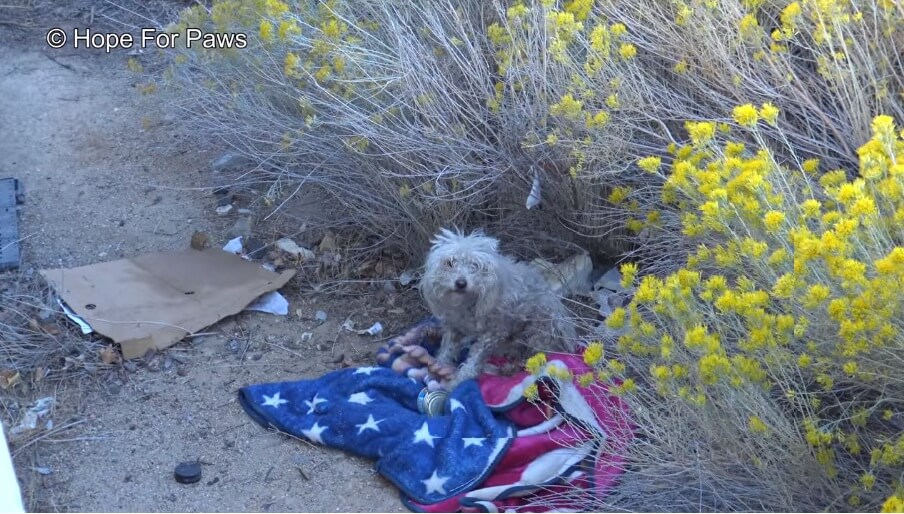 The two rescuers slowly tried to go near the dog, and Eldad instructed Loreta to give the poodle a taste of the food so he’ll calm down a little. She did as told, and tried to coax the dog to calm down.

As the two got closer to the dog, they saw his injury and to say it was heartbreaking was an understatement. The poor stray poodle actually lost his paw. One can see the bones are visible and the dog was trying its best not to put its injured leg on the ground and not to put weight on it. The dog’s fur was so dirty that it now looks to be a dirty white or cream instead of white. His fur was also matted since no one is taking care of it.