A call for an investigation was made after one died in a property in Birmingham, England. What a simple death investigation turned out to be a shocking revelation, to say the least. Inside the said property, 82 Chihuahuas were found.

Animal hoarding has been a problem ever since. Some were caused by breeders losing their ability to control the population, while some are due to owners not having their pets neutered or spayed. Usually, vets and rescue groups would come across animal hoarders with up to 40 pets, but the case we are about to share with you is an extreme case.

The police came to a property owned by a couple one day to investigate the death of the wife in a Washwood Heath area. She had an accident before and the complications caused by the incident was the reason for her passing. While no malicious events were recorded, the people who came to check on the case were surprised to find tons of little dogs on the property. 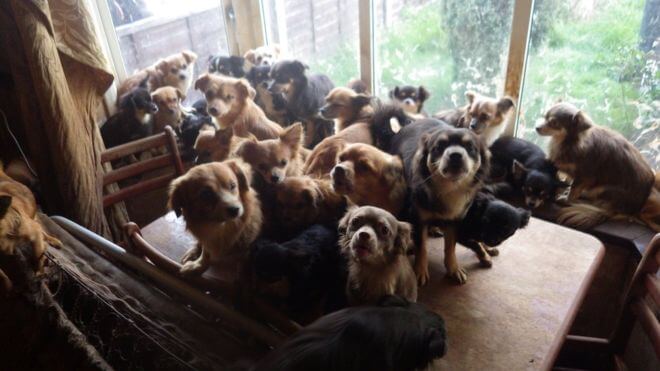 One of the officers claimed there were just too many of the Chihuahuas. They keep popping up in every corner, and they seemed to be afraid of new people. The house was in an awful condition and the property is nowhere near inhabitable to both the 82 Chihuahuas and the spouse of the woman who died recently.

What the police saw made them call the RSPCA. When the RSPCA officers came to investigate, they were more than stunned by the scene. They say it seems that an earthquake came in. The house was filled with different kinds of filth and it was really cramped inside considering the number of dogs in there.

The couple actually started with just two Chihuahuas – one male and one female named Blue and Tinkerbell, respectively. The two dogs were not neutered and spayed, and eventually, this resulted in breeding – a lot of it. What was two before was now up to 82 Chihuahuas.

Click on the next page to find out what happens next!